Similarly to Witney, Abingdon's history lies within the textile industry, once having close links to London and Birmingham via the Wilts and Berks canal. Much of Abingdon's historic industry has now been closed down, such as the Morland brewery and the MG car plant.

Abingdon school was the place that Radiohead was formed and is now known for its science park and sports facilities. Milton Park holds an Abingdon postcode and is headquarters to Sophos, amongst many others.

Sitting on the River Thames you'd expect there to be a rowing club but with Tilsley Park on the doorstep you also have access to athletics, football and hockey facilities, as well as being home to the Oxford Saints American Football team.

Are you looking for a local removal company?

Arkle Removals have over 30 years experience in the industry, and have gained a wealth of knowledge in relation to removal services.

Get a Quote Today 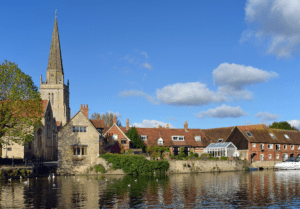 If you're looking for a professional removals company in Abingdon, then look no further than Arkle Removals. We have over 30 years experience of removals and can provide you with the a comprehensive package from start to finish.

We're the newest name in town but our vast knowledge and experience makes us the most professional too. As members of The National Guild of Removers you know by using Arkle Removals, in Abingdon, you will be getting the highest quality of service with greater protection for your belongings.

Chat to us today or find out more about our removals service here.