Banbury is a market town, steeped in history and famous for that nursery rhyme!

It's also well known for Banbury cakes and boasts the worlds largest coffee-processing facility! Key to Banbury's industry are the transport links with the M40 running along the north and the train station feeding into both Birmingham and London. Situated in North Oxfordshire it borders Warwickshire and Northamptonshire.

There are plenty of reasons to consider a move to Banbury and if you're involved in motor sport you may not look anywhere else, as racing teams surround it, not least because Silverstone is just a short trip up the A43. Beyond that Banbury is a vibrant town, that's growing to keep up with demand. The M40 corridor is being developed, for industry, and the Castle Quay development is going to see a modernisation of the retail area, taking advantage of the picturesque canal.

Get a Quote Today

Are you looking for a local removal company in Banbury?

Arkle Removals have over 30 years experience in the industry, and have gained a wealth of knowledge in relation to removal services. 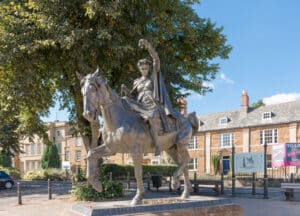 If you're looking for a professional removal company in Banbury, then look no further than Arkle Removals. We have over 30 years experience of removals and can provide you with a comprehensive package from start to finish.

We're the newest name in town but our vast knowledge and experience makes us the most professional too. As members of The National Guild of Removers you know by using Arkle Removals, in Banbury, you will be getting the highest quality of service with greater protection for your belongings.

Chat to us today or find out more about our removals service here.